It Happened In Israel The “Stolen” Car

Here’s another It Happened in Israel story:

Since Stan and Fran like to explore all parts of Israel, they decided to rent a car for entire six month period of their stay in Israel. They had previously rented cars In Israel and found the cars provided by most of the major car rental companies were not well maintained, both cosmetically and internally.

This year’s rental began the same way with the first car returned because the idler was too weak. The next car they got had lots of miles under its hood, was not particularly clean, but ran well initially, before it started shaking.

One Thursday evening Fran and Stan decided to go out to eat in Jerusalem and then go to a comedy club with an English-speaking show. They decided to go again to a restaurant they had been to earlier in the week because the food was good and the service fairly quick. The restaurant was located off a major intersection.

They found a spot close to the restaurant, and had another enjoyable meal. They left the restaurant and set out to retrieve the car to proceed to the club. Since the car did not have a remote control, they were unable to signal it. So they walked to where they remembered leaving the car, but alas, it was not there. They walked up and down the block several times and looked across the street. The car was nowhere to be seen.

Slightly panicky, Stan called the car company from which they had rented. The car company told them to get to a police station, which was about 20 minutes away by car, right away. A police car happened to driving down the street on which they were standing, so they flagged the car. The officers told them to call 100 to report the theft and drove away.

Stan called 100 and told them the details of the theft. They instructed him to go to any police station within the next 12 hours to file a report, but they assured him that the theft was now in the computer.

Stan called the car company and told them he had reported the theft to the police and that it was now in the computer. The car company took his phone number and assured him they would call him back.

So Stan and Fran waited. Luckily for them there was a shopping mall just across the street, so they waited there. While they were waiting, Stan compiled a list of all the things that had been in the car. Fran was especially upset about her bridge camera which she had foolishly left in the car. Stan bemoaned the loss of the fresh fruits he had purchased earlier in the day, especially the strawberries. They also called their daughter, Sarah, at whose house they were staying, who advised them to go to the comedy show and take the bus home afterwards.

Stan and Fran decided not to go to the show, but to wait for the car company’s return call. They waited and waited. After about two hours and no word from the car company, they decided to give it up and return to Bet Shemesh, the city in which they were staying, which is about 35 minutes by car from where they were.

First they called their daughter, Sarah, in Bet Shemesh. Their son-in-law, Danny, offered to pick them up, but by the time he would get there they could already be home. Sarah recommended a car service which, for 150 NIS, ($43), would take them door to door. Stan called the company, but it had no cars available. So they decided to take a bus to the central bus station and from there catch a bus to Bet Shemesh.

The bus to the Central bus station came after about 15 minutes. That cost them 7 NIS. They had to cross over a grassy area to catch the next bus and noticed a homeless man warming himself next to a fire he had constructed in an area close by. That was heart warming.

The bus to Bet Shemesh came about 10 minutes later and cost 16 NIS. While on the bus, Stan decided to call the car company to ask why he had not heard from them. They responded that they were unable to do anything until they got a copy of the police report. When Stan told them the Police said the report was in the system, they explained that they needed a physical copy of the report filed at a Police Station. So Stan and Fran decided to go to the Bet Shemesh Police station immediately after arriving at their daughter’s house. (Incidentally, in Israel all police officers are part of the same police force-i.e. the police are a national force. So the report does not have to be filed in the same city where the crime took place.) Shortly after this conversation, Stan’s phone died. It had heard enough.

Stan and Fran arrived at Sarah’s home about 10:30 P.M. Danny volunteered to take them to the Bet Shemesh police station to help with the language barrier. The first officer they encountered was very rude, but he directed them to an office to wait for another officer who would prepare the report. A young lady appeared, took them all into an office, and prepared a hand written report of the theft and the possessions left in the car, including the strawberries.

The officer was incredulous that Stan and Fran had come to the Bet Shemesh Police Station to file the report, since there was a police station about a minute’s walk from the block from where the car had been stolen. She was also puzzled that the theft occurred on a well lit block full of people. She was efficient, personable and had a good sense of humor. She explained that, although she was preparing the report, it still had to be entered into the computer and sent to the Jerusalem Police Station close to where the car had been stolen. This would probably happen overnight.

When they got back home,Danny urged them to call the car company to let them know the police report would be in the system early the next day. When Stan called using Fran’s cell phone, the woman on the phone shouted, “We found it. We found it.” They said the car had been found very close to where it was reported stolen and asked Stan to pick it up then. It was now 11:30 P.M. They said they had tried to call Stan’s phone earlier, but there was no answer.

Danny offered to drive Stan to Jerusalem to pick up the car, but Danny had to go to leave for work early the next morning. Since the round trip to Jerusalem would mean coming home well after midnight, Stan explained to the car company that he could not pick up the car now, as he was in Bet Shemesh. The car company said they would send an employee to Sarah’s house in Bet Shemesh to pick up the keys and that employee would then drive the car to Bet Shemesh early the next morning.

After a night spent reassuring each other that the car really had been parked where they thought it had been, Stan got up early to await the arrival of the car. Meanwhile, the car company’s office in Bet Shemesh called to say the car was parked at their office and would be delivered to Sarah’s house within the next half hour. Stan waited and waited.

After about an hour, he called the car rental company’s headquarters office at the Tel Aviv airport and was told,” The car’s at our Jerusalem office. Come and empty it. We’ve cancelled your contract and will pay you any money due.” They claimed it cost them too much in manpower (5 employees) to investigate the”theft” and find the car and that Fran and Stan were no longer welcome as renters. They also said they could not empty the car themselves and send its contents to Bet Shemesh since that would make them open to charges of stealing some possessions. Furthermore, since it was Friday, the car rental office in Jerusalem was closing at 1:30 P.M.

Stan quickly took a cab to a small car rental office in Bet Shemesh and rented another car. He returned, picked up Fran and together they drove to Jerusalem to empty the car. When they finally found the car rental office (the address given did not match the actual location), they discovered that the car’s contents had already been emptied into bags which were waiting for them in an office. They searched the car anyway and found a few additional items which the rental company had missed. They also obtained the address where the car had been found.

Like perpetrators returning to the scene of a crime, Fran and Stan drove to the place from which they thought their car had been stolen.  They then walked from there to where it had been found. Lo and behold, it was just across the main intersection from where they thought they had parked it. It turns out they were so sure where they had parked that they had checked only two of the four intersecting streets.  They had never bothered to check the other two.

They drove home a bit chagrined and wondering if they were”losing it.” But they decided the problem was that they had recently eaten at the same restaurant and simply remembered the previous parking spot, rather than the current one.

This story bothers me. Distraught tourists in a foreign country call their car rental company and report their car stolen. Shouldn’t the company’s first response be to tell the tourists to check all four intersecting blocks to make sure they did not simply forgot where they had parked? Shouldn’t the police have told them the same thing? Since most Israeli rental cars have LoJack like sensors, why didn’t the car company activate them immediately? Why didn’t the car company tell them a Police station was just up the block , instead of advising them to go to a far away station? Finally, I am amazed at the rude behavior of the rental company. I would reveal the name of the company, but Stan and Fran are still deciding whether to write to its Chief executive to file a complaint.

Incidentally, the strawberries were still good.

The morale of this story: Always write down or photograph where you park your car, especially when you’re in a foreign country. Don’t call the cops unless you’ve checked all streets intersecting the street on which you thought you parked. And finally, don’t eat in the same restaurant twice in the same week unless it has its own small parking lot.

To express my appreciation to the manager of the car rental company for a job well done, I’ve decided to dedicate this t shirt design to him: 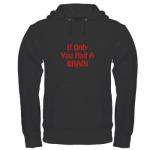 Just think, if only you could.

One thought on “It Happened In Israel The “Stolen” Car”