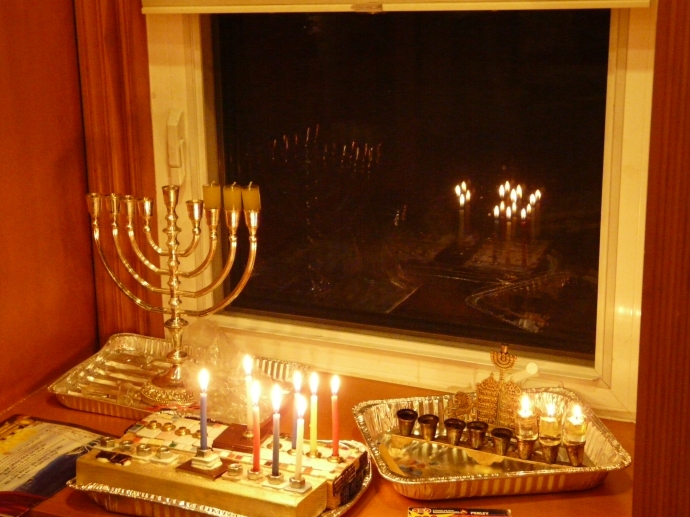 This year JewTee has decided to feature articles about the fast approaching Jewish holiday of Hanukkah, or  Chanukah, a holiday of joy and thanksgiving. We all know that on Hanukkah you light candles, play the dreidel and eat latkes, but why do we do these things? Read on to find out the answers to these and many other Hanukkah questions.

Hanukkah 2017 begins the evening of December 12th and lasts until nightfall December 20, 2017.

What does Hanukkah mean?

Hanukkah, or Chanukah, is the Hebrew word for dedication or inauguration. The word Chanukah in Hebrew can also be divided into two Hebrew words: Chanu- meaning they rested, and Kah-here.  In addition, the numerical value of the Hebrew letters which spell Chanukah is 25. On the 25th day of Kislev, the Hebrew date of Chanukah, the Maccabees rested from fighting and rededicated the Temple.

What is the History of Hanukkah?

The history of Hanukkah starts with Alexander the Great. When he conquered Syria, Egypt and Israel, he  allowed the countries he conquered to practice their own religion and gave them a bit of autonomy. Some Jews liked the Hellenistic pagan culture and began to adopt Greek language, names, customs and dress.

More than 100 years later, a descendent of Alexander, the Seleucid Greek King Antiochus IV ruled the area. In 168 BCE, thinking the Jews had revolted, as they had forced his Hellenistic High priest designee to flee, he entered Jerusalem, massacring thousands of Jews and enslaving thousands more. Siding with the Hellenists against the Traditionalists, he forbade the practice of Judaism, including the Sabbath, circumcision and dietary laws, under the penalty of death. Torah scrolls were confiscated and burned. He restored his Hellenistic High Priest and further defiled the Temple by placing a statue of Jupiter above the altar and requiring that pigs be sacrificed there to the pagan god.  The King then ordered representatives to go from town to town to force the people to worship the pagan gods. Those who refused were put to death.

When they reached the town of Modiin, where Mattityahu, the old priest lived, an altar was built in the center of the village and a Greek officer demanded that Mattityahu offer sacrifices to the Greek gods. When he refused, a Hellenistic Jew attempted to offer such a sacrifice. Mattityahu  killed him. His five sons and their friends then killed the  Greek overseer and destroyed the altar. This band of Jews fled to the hills and formed a guerilla army. So began the war against the Hellenistic Jews and the Greeks.

Before his death, Mattityahu designated his oldest son Judah, nicknamed Maccabee, Hammer, to lead the battle against the Greeks and the Hellenistic Jews. Judah’s followers were called the Maccabees, which is also an acronym for the Hebrew phrase- Who Is Like You Among the Powers,  Oh Lord.

The Greeks fought the Maccabees and their followers. After three years, in 165 BCE, the Maccabees managed to reconquer Jerusalem. The Temple had been used as a pagan sanctuary in which pigs were sacrificed on its altar. The Maccabees cleaned the temple, built a new altar and menorah, as the real one had been melted down by the Greeks. The Maccabees then rededicated the Temple on the 25th of Kislev, which is the Hebrew date on which we begin the celebration of Chanukah.

When they attempted to light the Menorah with pure olive oil from jars with the High Priest’s seal, they found only one vial, containing enough oil to last but one day. This was problematic, as the Menorah was supposed to be lit daily. Miraculously, it lasted for eight days, which was enough time for a new supply of oil to be produced.  To commemorate this miracle, the sages established an eight day holiday of thanksgiving and candle lighting.

How many Hanukkah Menorahs Should I Set Up for My Family?

In the Sephardic (Jews originally from the Iberian peninsula) tradition, only one Menorah per household is lit. In Ashkenazic tradition, each member of the household  lights his or her own menorah.

Which Hanukkah Candles Should I Use?

Many people like to use olive oil, since the miracle of Hanukkah involved olive oil. These days many Jewish bookstores, including those online, sell pre-measured olive oil in disposable glass cups which fit into the cupholders of many standard menorahs. But wax candles are fine also as long as they last at least 30 minutes after nightfall.

Where Should I Place My Menorah?

When Should I Light the Candles?

It’s best to light the candles at nightfall. However, as long as people are still awake, it can be lit even late at night.

Is there a particular way to light the Hanukkah candles?

On the first night, place the candle at the far right, as you face the menorah. The helper candle, the Shamash, which is used to light the candle, is not counted as a candle. It should have a designated place on your menorah.

On the second night, begin by placing one candle on the right, followed by another on the right. Light the candle to the left, first. The principle is as follows -place candles in the Chanukah menorah from right to left; light the Hanukkah candles in order from left to right. This means that the candle added that night will always be lit first.

The first two blessings are said with the Shamash already lit, but immediately prior to lighting the Chanukah candles.

Blessed are You, the Lord our G-d, King of the universe, Who sanctified us with His commandments, and commanded us to kindle the Chanukah candle.

Blessed are You, the Lord our G-d, King of the universe, Who made miracles for our forefathers, in those days at this season.

This blessing is said on the first night only.

Blessed are You, the Lord our God, King of the universe, Who has kept us alive, sustained us, and brought us to this season. Afterwards, we say the following:

We kindle these lights for the miracles and the wonders, and for the salvation and for the battles which You performed for our forefathers, in those days , at this season, through your holy priests. These lights are sacred for all eight days of Chanukah and we do not have permission to make personal use of them, but only to look at them in order to express thanks and praise to your great Name for Your miracles, Your wonders and Your salvation.

To watch the Chanukah candles being lit and to hear the blessings, click here:

There’s still time to buy Hanukkah shirts, mugs, aprons and other gifts from JewTee.com. To see our entire collection of Jewish and Hanukkah apparel and gifts, click here:

Our next post, will highlight Hanukkah foods and another Chanukah traditions.